Itinerant self-guided trekking in Tenerife. You will walk along the crest of the Teno massif, through the laurel forest, discover the lava fields of the last volcanoes on the island, explore the Canary Island pine forest and climb to the summit of Spain, the Teide volcano (3,715m). 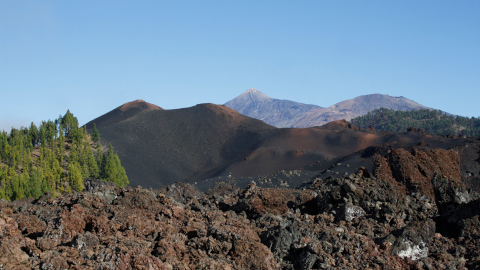 - The best itinerant hiking circuit in Tenerife.
- Walk up to Pico del Teide (3,715m) and see the sunrise.
- Sleep in the Teide National Park and enjoy its landscapes and starry skies. 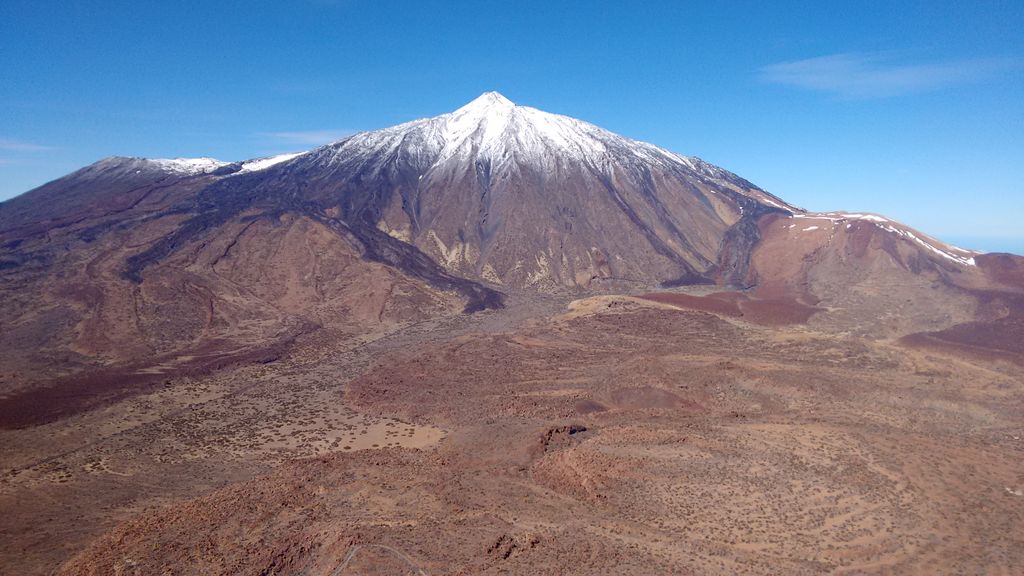 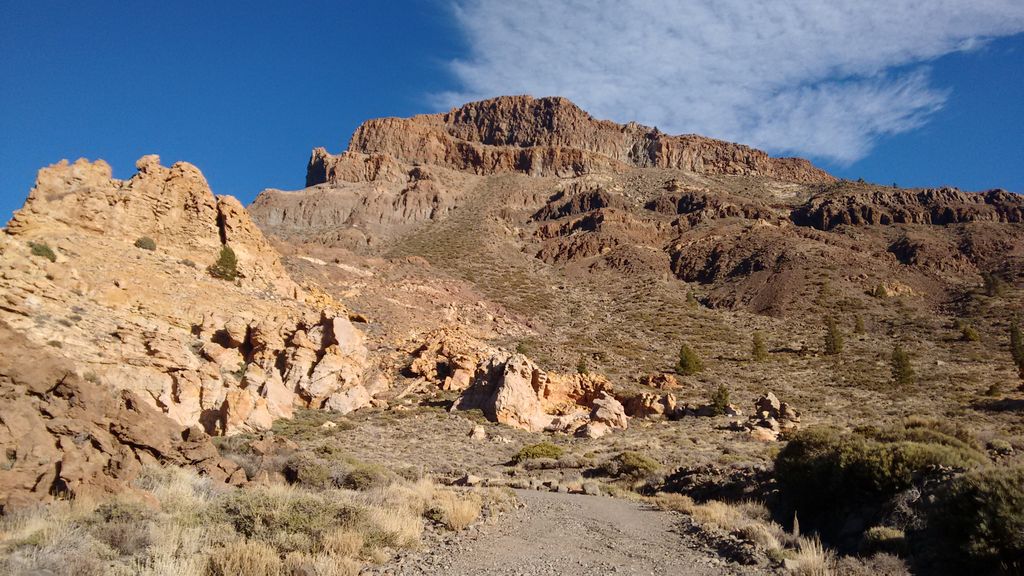 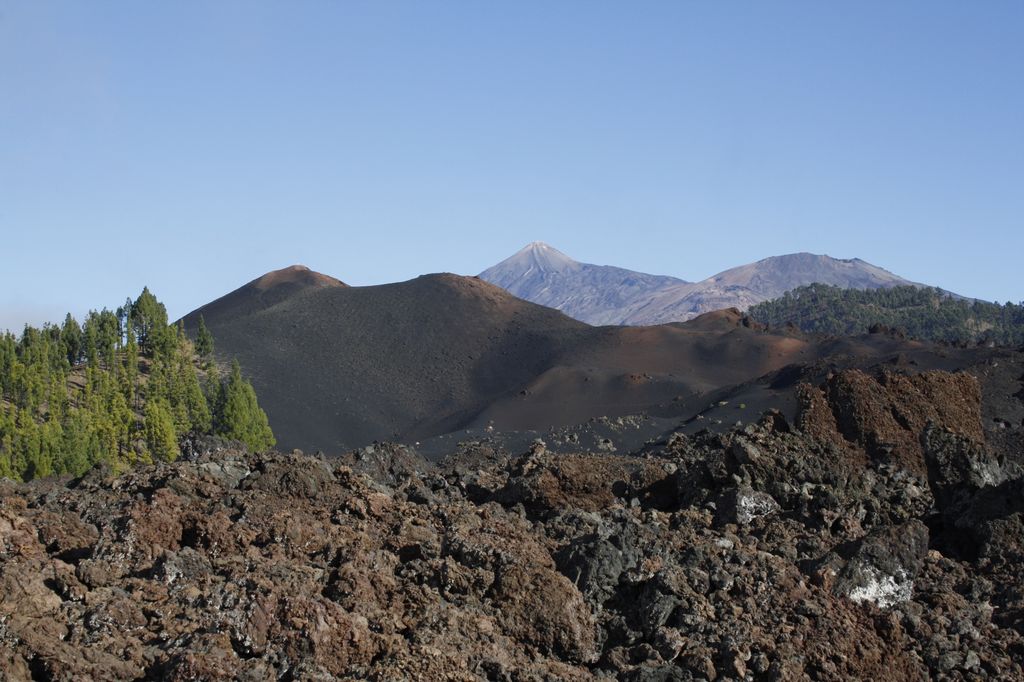 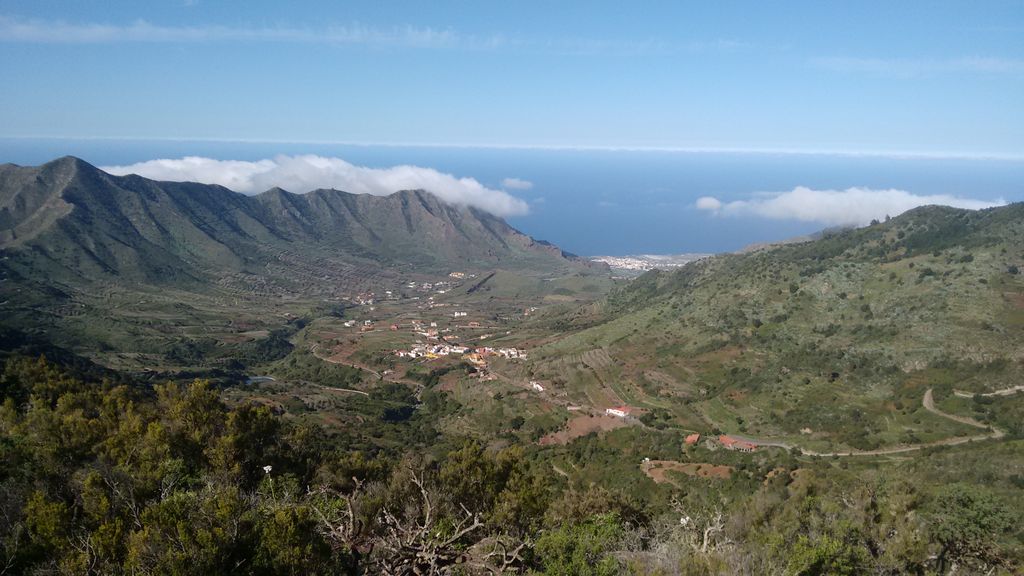 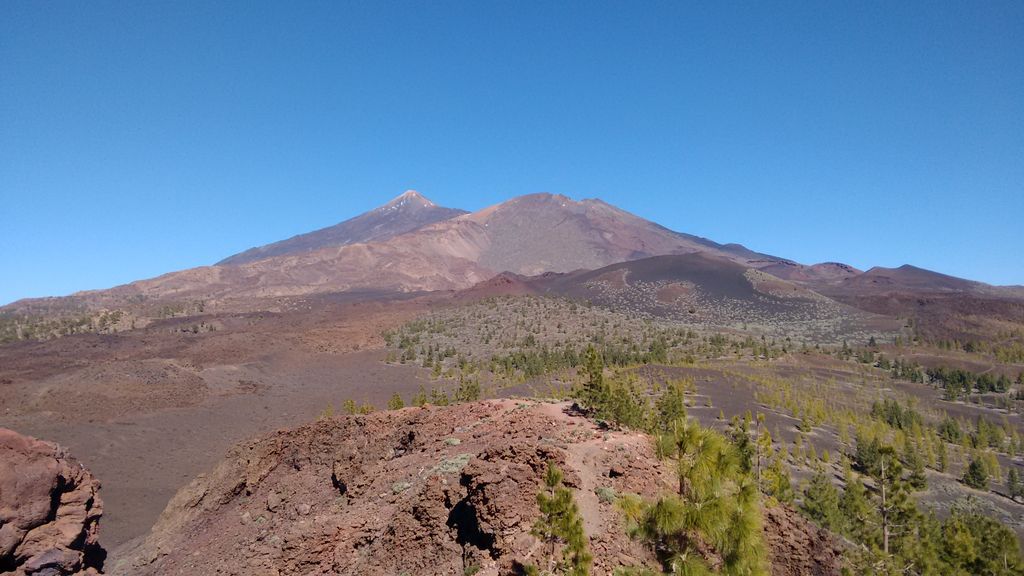 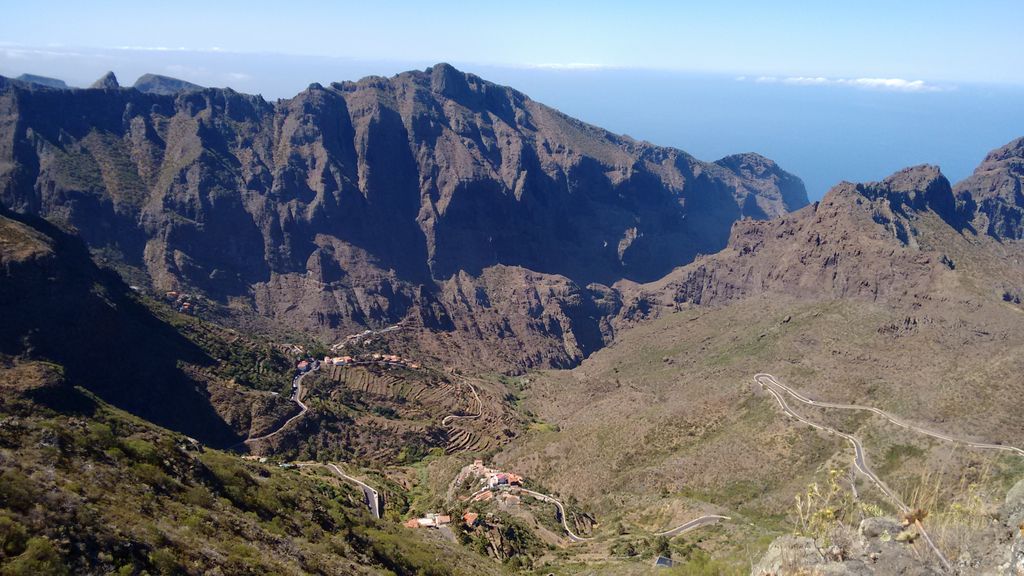 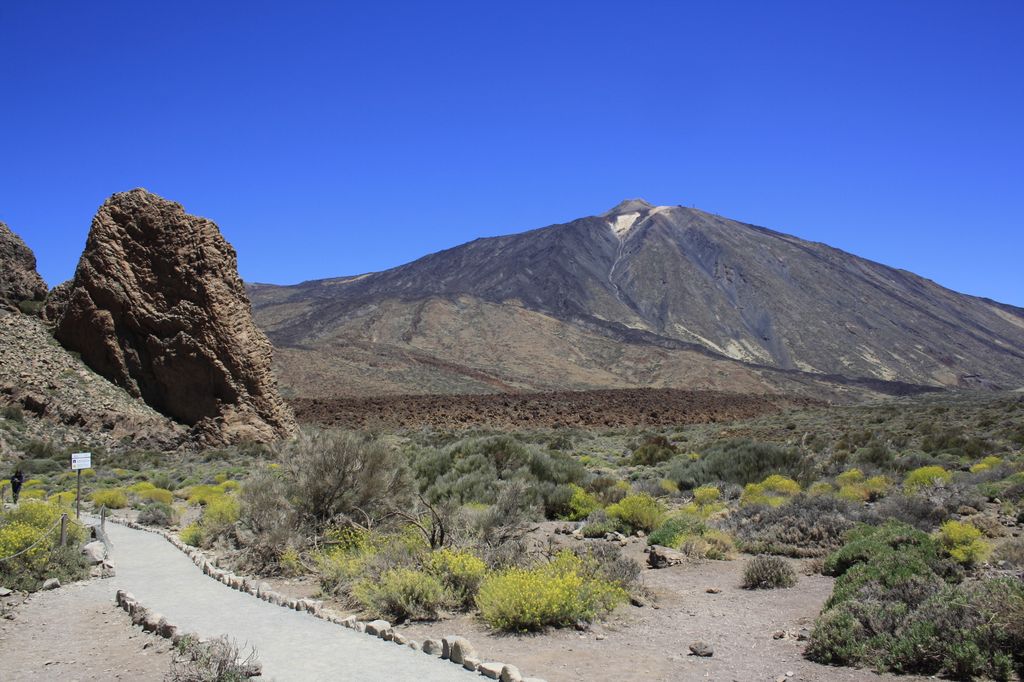 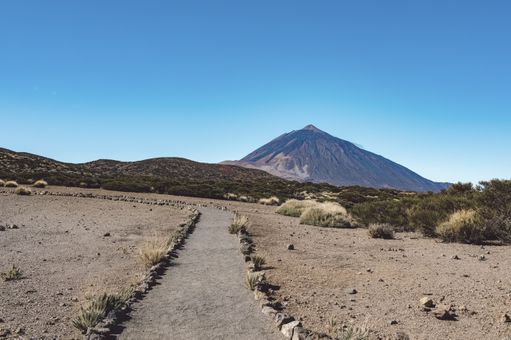 Flight to Tenerife. Transfer from the airport to the accommodation.

After a hearty breakfast, we start our week of hiking by setting off on foot from the hotel to explore the Teno Rural Park, one of the oldest massifs on the island, 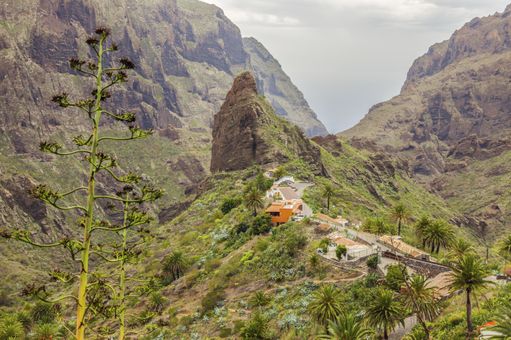 in the northwest of Tenerife.

We climb up to the Cumbres de Bolico, from where we can see magnificent panoramic views of the Canarian pine forest on the slopes of the Teide and Pico Viejo volcanoes and the neighbouring islands of La Gomera and La Palma, when visibility is good. From here, we start to walk along the ridge, which divides the massif into two parts. We can observe the climatic, geomorphological and ecological differences between the two slopes: to our left, an arid area of deep ravines where the Barranco de Masca and its hamlet stand out, and to our right, a greener and more fertile area where the Valle de El Palmar is located.

Approaching the Meseta de Teno Alto, we enter the most rural area of this protected natural space. The terraced crops that cover the slopes of the ravines and the goats, which are still present, have been the basis of the local economy. A stop at the hamlet of Los Bailaderos will allow us to taste or buy some of the local products, such as cheese and honey.

We continue our way through a small redoubt of laurel forest and finish with a descent to the hamlet of El Palmar, in front of its peculiar volcano, an old volcanic stone quarry. Transfer to our accommodation between banana plantations on the coast of Isla Baja.

We leave our accommodation amidst banana plantations in the direction of Los Silos, where we can appreciate a small typical village of the island, its cobbled streets, its square with a lively central kiosk and some historic buildings such as the former Convent of San Sebastian and the Church of La Luz.

From here we start the ascent 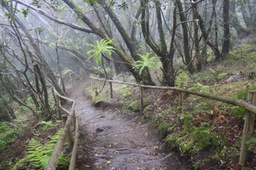 towards the Cuevas Negras, a spectacular geological formation in the ravine of the same name. The vegetation, humidity and the presence of water become more and more noticeable as we penetrate the dense laurel forest.

This forest of tertiary origin, only found in Macaronesia, is one of the natural treasures of the islands. Expert eyes and botanical enthusiasts will be able to recognise dozens of trees and plants endemic to these islands and some shared with the European continent.

In this forest, known as Monte del Agua, we also find various species of birds, among which you may be lucky enough to spot the rabiche and turquoise pigeons, native to the laurel forest.

This cobbled road, an old communication route between the coast and the midlands, connects with other villages and takes us to the village of Erjos, where we enter a more rural area, a former grain granary. We suggest you visit the Ecomuseum of El Tanque, which we find on our way to the outskirts of the village, if you really want to perceive and get to know what rural life and heritage in this area was like until almost the present day.

Our path heads towards Los Partidos de Franquis, a continuation of this agricultural area, where you can feel like a neighbour tonight. We arrive at our rural accommodation. 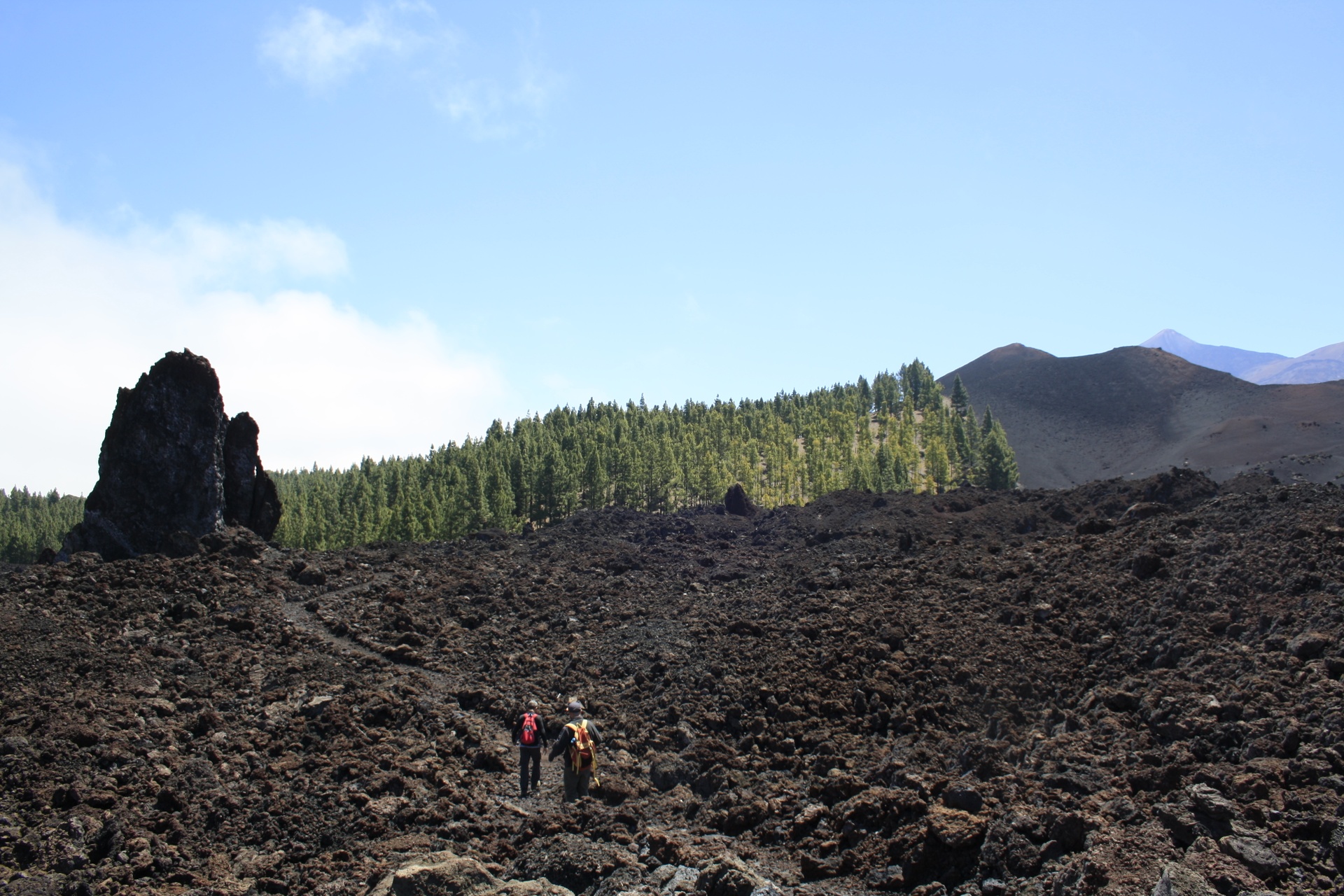 Ready for a new day, today we propose you to discover the volcanoes that caused the last three eruptions in Tenerife..

We start by heading towards the Arenas Negras volcano (1706), whose eruption had fatal consequences for the town and port of Garachico, located on the edge of the sea in the northern part of the island, as its lava destroyed a large part of its houses and its port, the most important on the island up to that time. Not far from here, we skirt our second volcano of the day, Chinyero (1909), the last volcanic eruption on the island, but with less dramatic consequences than the previous one.

We pass through the Corona Forestal Natural Park, which is home to the Canary Island pine forest, a species native to the islands, and pass by older volcanic cones, ascending towards the imposing volcanoes Teide and Pico Viejo in the distance.

Next to the Samara Volcano, from the summit of which we can enjoy magnificent views, we enter the Teide National Park. We cross numerous lava flows descending down the slope, including those of the last of the volcanoes on our excursion, the Chahorra Volcano (1798). The vivid contrast of the dark colours of the lava, the green of the pine forest, the blue of the sky and the white of the sea of clouds bring today's hike to an end at an altitude of more than 2,000 metres.

Transfer to your accommodation in Vilaflor, the highest village on the island, where we suggest a stroll around its pretty garden square, its churches of San Pedro and Santo Hermano Pedro, its craft shops to discover the rosette and the fretwork and taste its almond pastries. 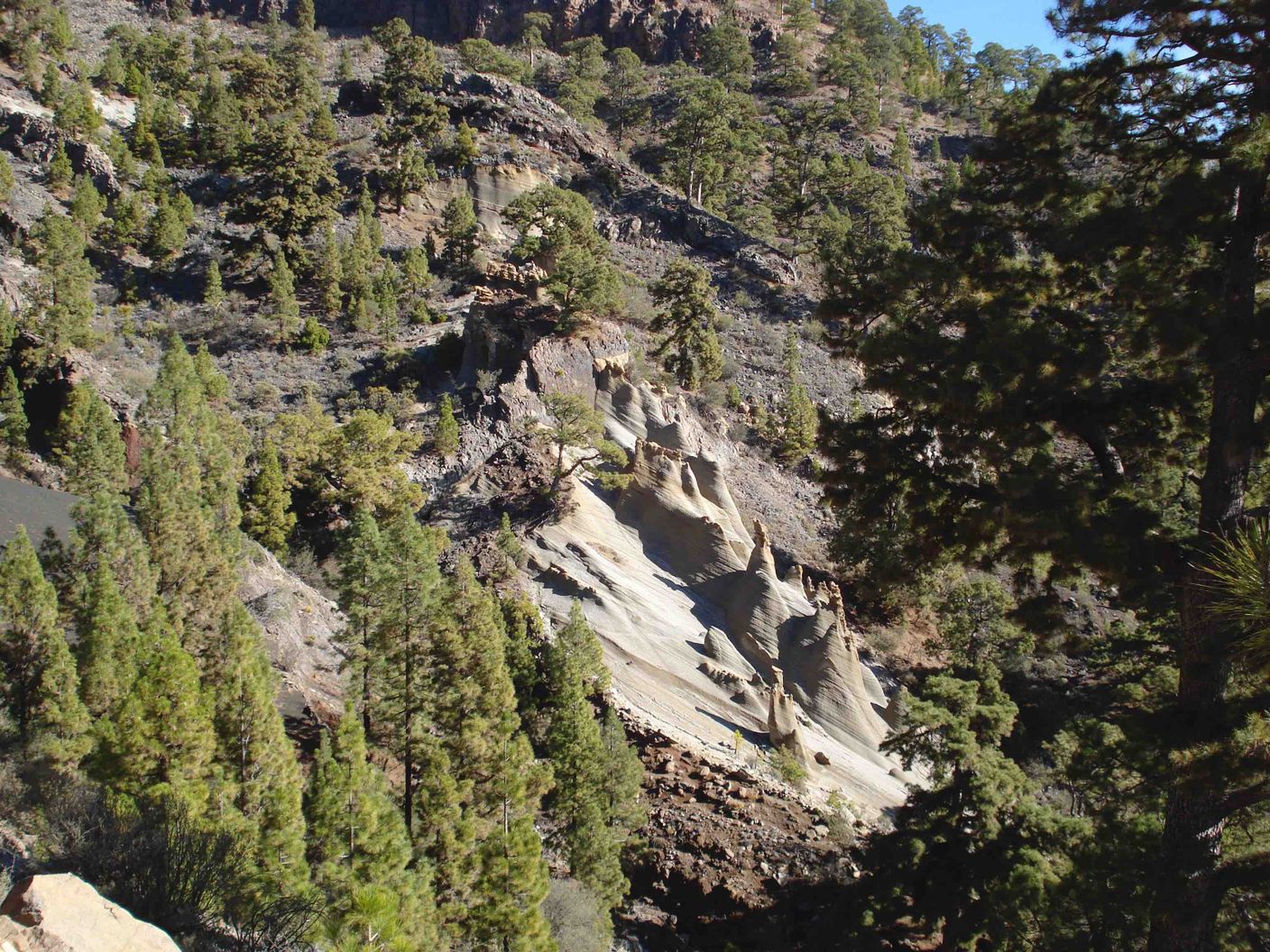 Today's route follows the Camino Real de Chasna, an old communication route that linked the south with the north of the island via the summit..

This first part of the route takes us through the Canary Island pine forest in the south of the island, which has shown a great capacity for resilience in the face of fires. Here we find some of the longest-lived pine trees in the Canary Islands, such as the Pino Padre, which we pass by.

We gradually gain height and, among the pine forest, the natural monument of Los Escurriales, now popularly known as Paisaje Lunar (Lunar Landscape), opens up in a ravine. The erosion of water and wind has brought to the surface and sculpted this peculiar geological element that contrasts completely with the rest of the landscape and the surrounding geological elements. We count on you to appreciate and preserve it, given its fragility.

We soon cross the 2,000 m. / 6561 ft barrier and enter the Teide National Park. The pine trees give way to more bushy, high mountain vegetation and a more volcanic landscape, affected by eruptions that are not very old. The ascent to the summit of the Montaña de Guajara gives us stupendous views of the south of Tenerife and the island of Gran Canaria, in the distance with clear skies, but above all once we reach its peak, at 2,715 metres above sea level. This is undoubtedly the best viewpoint on Teide, which appears majestic in front of us and which we will climb tomorrow.

The Caldera del Teide, 16 kilometres in diameter, which opens up at the foot of the volcano, is a true mosaic of lava tongues of varied shapes and rich colours, especially ochre. After regaining our strength, we start the descent to the interior of Las Cañadas del Teide, which well deserves its name because of the incessant passage of goat transhumance until it was protected as a National Park in 1954. In spring and early summer we can appreciate the flowering of the high mountain and with it the spectacular and endemic red bugloss, which usually grows slender to over 2 metres high, in the best cases, on the slopes of Degollada de Ucanca.

We arrive at our hotel and take time to rest and recharge our batteries, but also to appreciate the sublime landscapes and the night sky.

Day 6
The Caldera of the Teide National Park 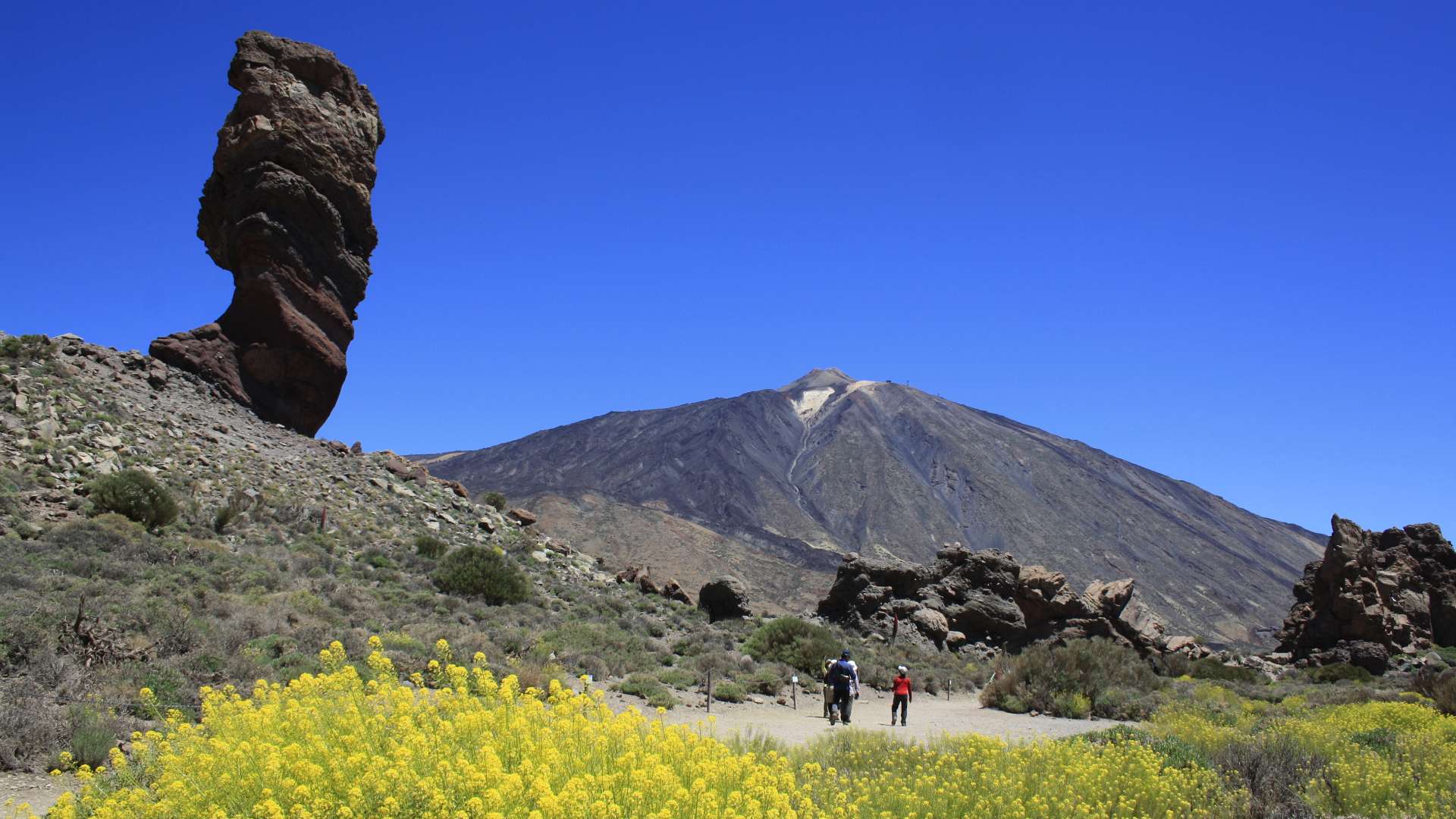 This morning we can enjoy breakfast, the facilities and the surroundings in peace and quiet, starting the day around midday.

A walk around the area before setting off allows us to discover the Roques de García, with the famous Roque Cinchado and the omnipresent Teide in the background, which you may remember from the old thousand-peseta banknotes. Also of note are the views over the Llano de Ucanca, an extensive sandy plain of easy transit, which is the largest of the ravines.

We leave the accommodation and walk along the Pista de Siete Cañadas towards the Casas del Sanatorio and from there towards Montaña Blanca, enjoying a palette of colours worthy of the best artist and every detail of this scenery, which we sometimes think has been taken from another planet.

The Montaña Blanca trail begins to rise again above the Caldera to offer great views and brings us closer to the so-called Huevos del Teide, colossal-sized accretion balls originating from the last eruption of Teide. The path begins to ascend the Teide Volcano itself, zigzagging between two lava flows. The vegetation starts to become scarce, as does the oxygen, from 3,000 m. 9842ft above sea level, but the Altavista Refuge soon appears before our eyes, to offer us a well-deserved rest before tomorrow's assault on the summit.

Day 7
Ascent to Pico del Teide (3.715m) and Sunrise from the summit 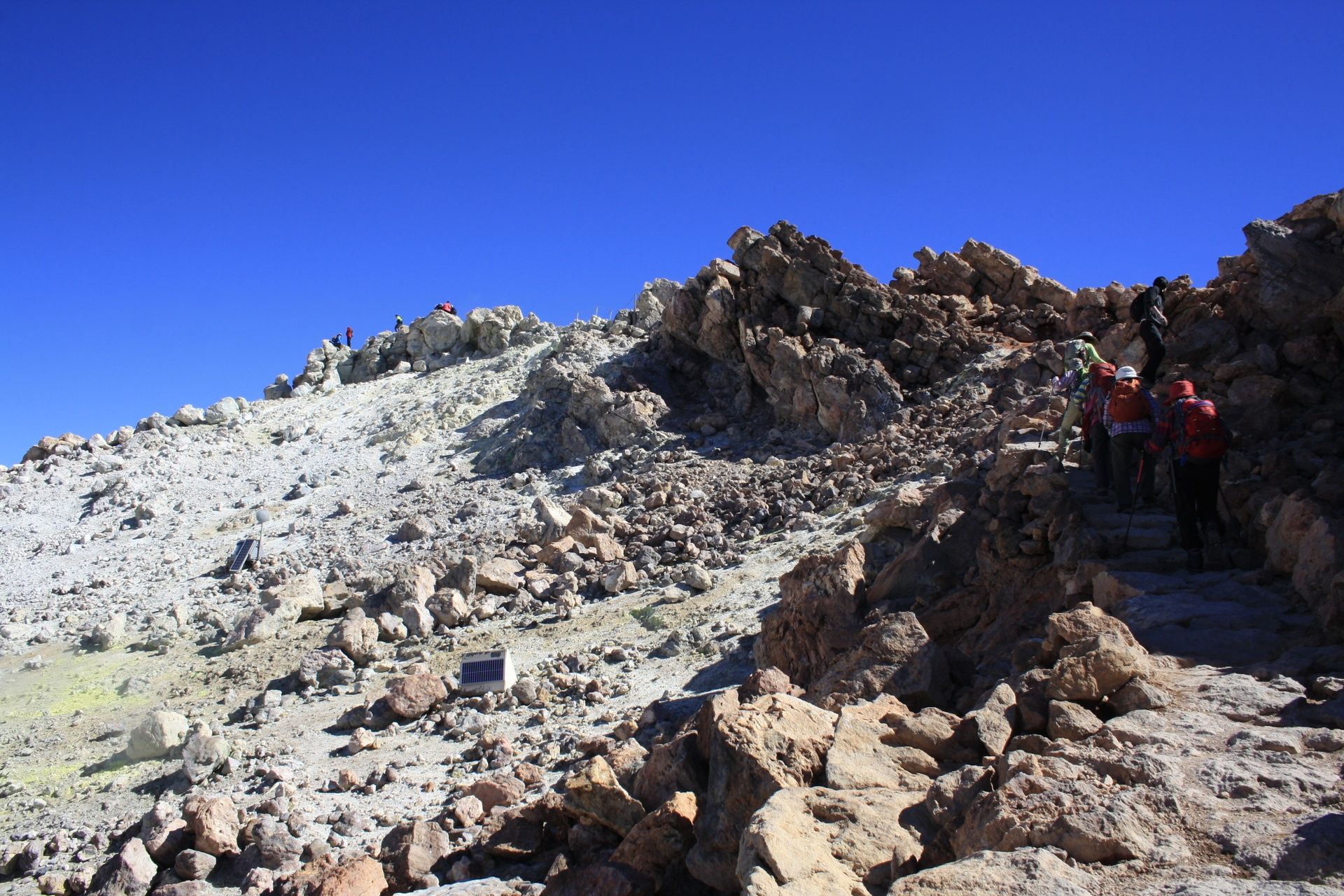 After a short night, we set off for Spain's highest peak and take the opportunity to watch the sunrise.

The first slopes, still illuminated by our headlamps and by the moon or the starry sky, are hard, but once we warm up and get into our rhythm, we advance determinedly to La Rambleta, the old crater of Teide now covered by the volcanic cone of the last eruption.

We pass by the terminal station of the Teide cable car and turn to face the last ramps. Dawn begins to break and we reach the Teide Crater shortly before sunrise. Numerous fissures let out fumaroles of gases and sulphur, a bit of heat never hurts at this point.

We settle in, sheltered from the wind, ready for a similar spectacle every day, but always different and captivating. At the same time, to the west, the Sombra del Teide begins to form, an almost perfect pyramid. All that remains is to find the highest point, Pico del Teide (3,715m), and enjoy the 360-degree views of Tenerife and the neighbouring islands before starting the descent.

This time we will descend along the path that leads to Pico Viejo (3,134m), the second volcanic peak of the island, and from here to Roques de García. Arrival at the hotel where we put an end to a week of hiking in Tenerife which we hope has been very satisfying and enriching in terms of experiences. 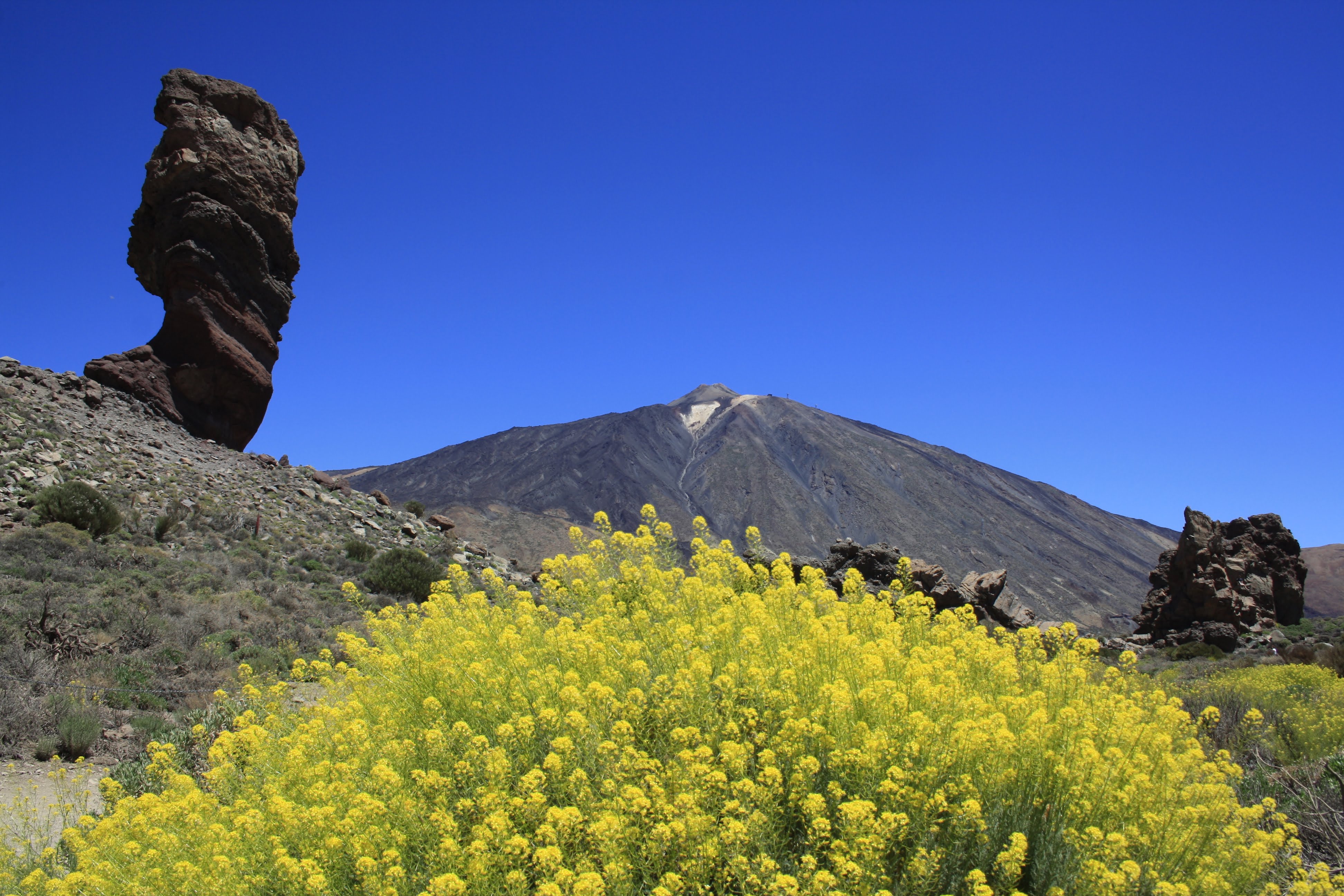 Breakfast at the hotel and enjoy the Teide National Park until the transfer to the airport.

Availability and Confirmation in 3 steps

Ask us any other questions you may have