Path of the historic volcanoes of Tenerife 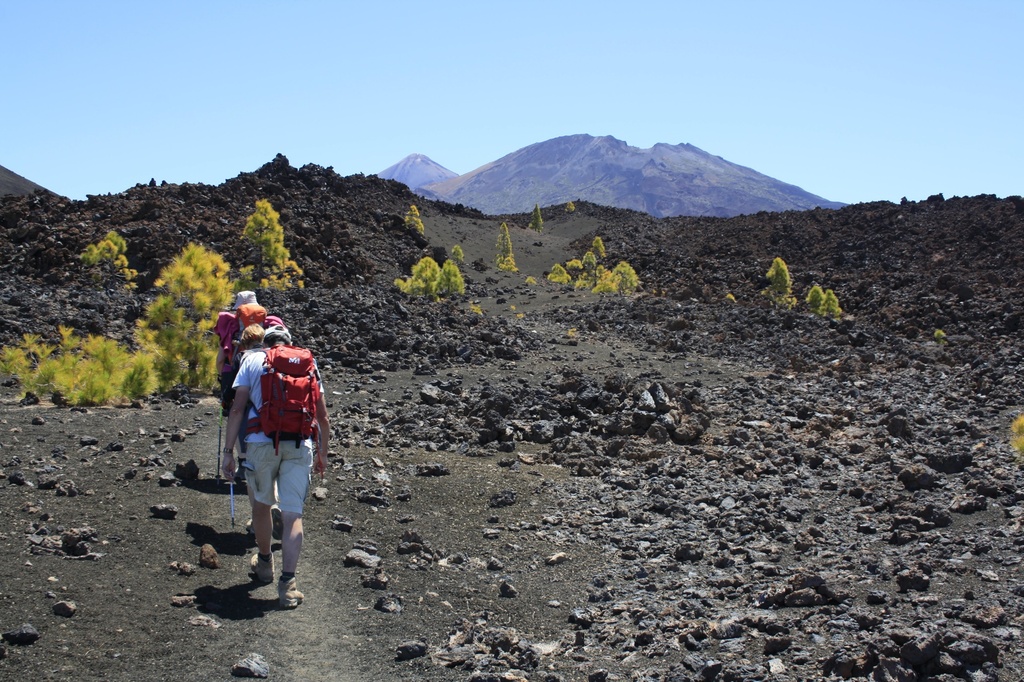 Path of the Historic volcanoes of Tenerife

- Discover the last volcanic eruption in Tenerife: Chinyero (1909) and the volcano that destroyed Garachico: Arenas Negras (1706).
- Go deep into the Canarian pine forest, walk over lava fields and volcanic lava flows and see how life makes its way through them.
- Explore the Chinyero Special Nature Reserve and learn about the importance of its geological values. 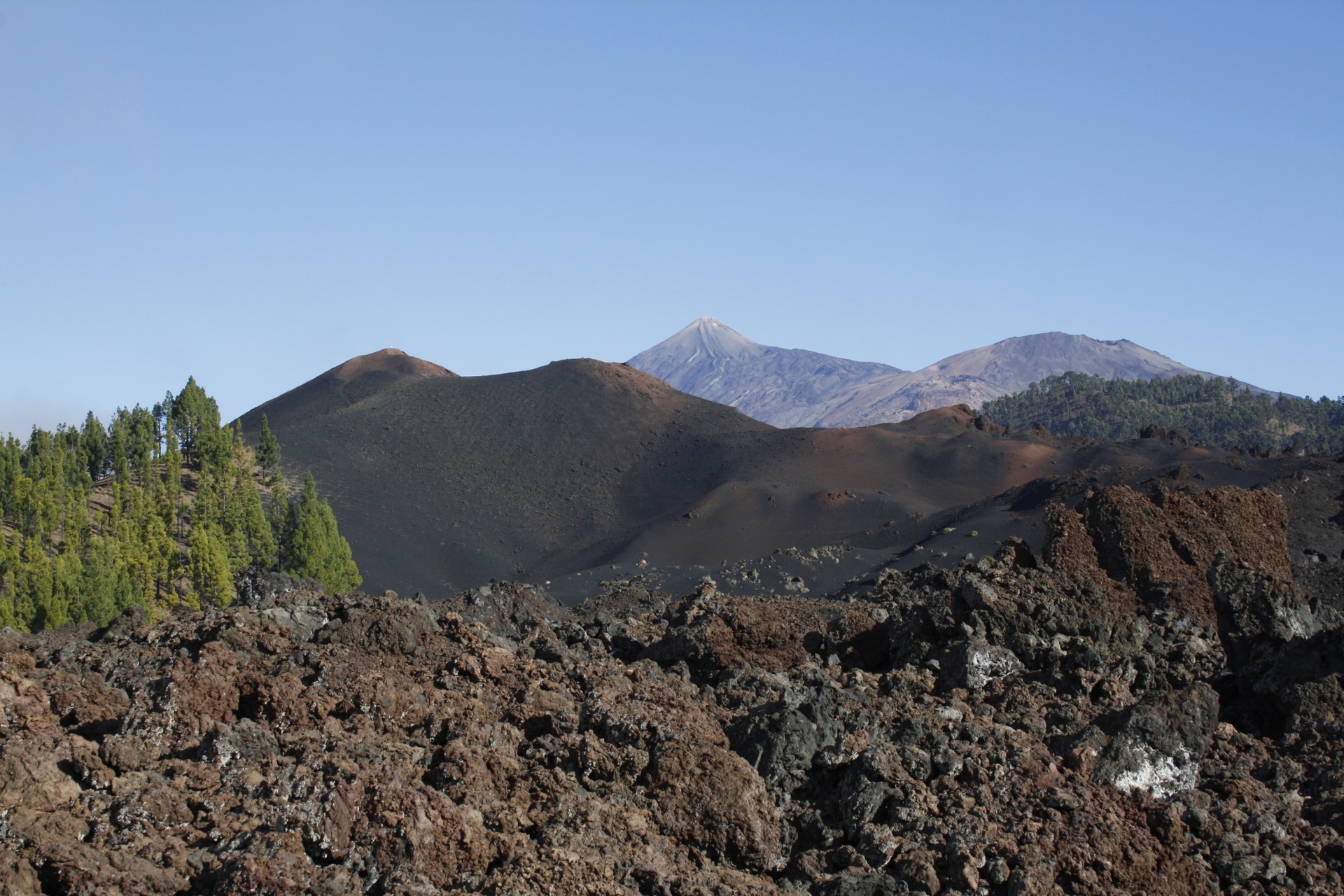 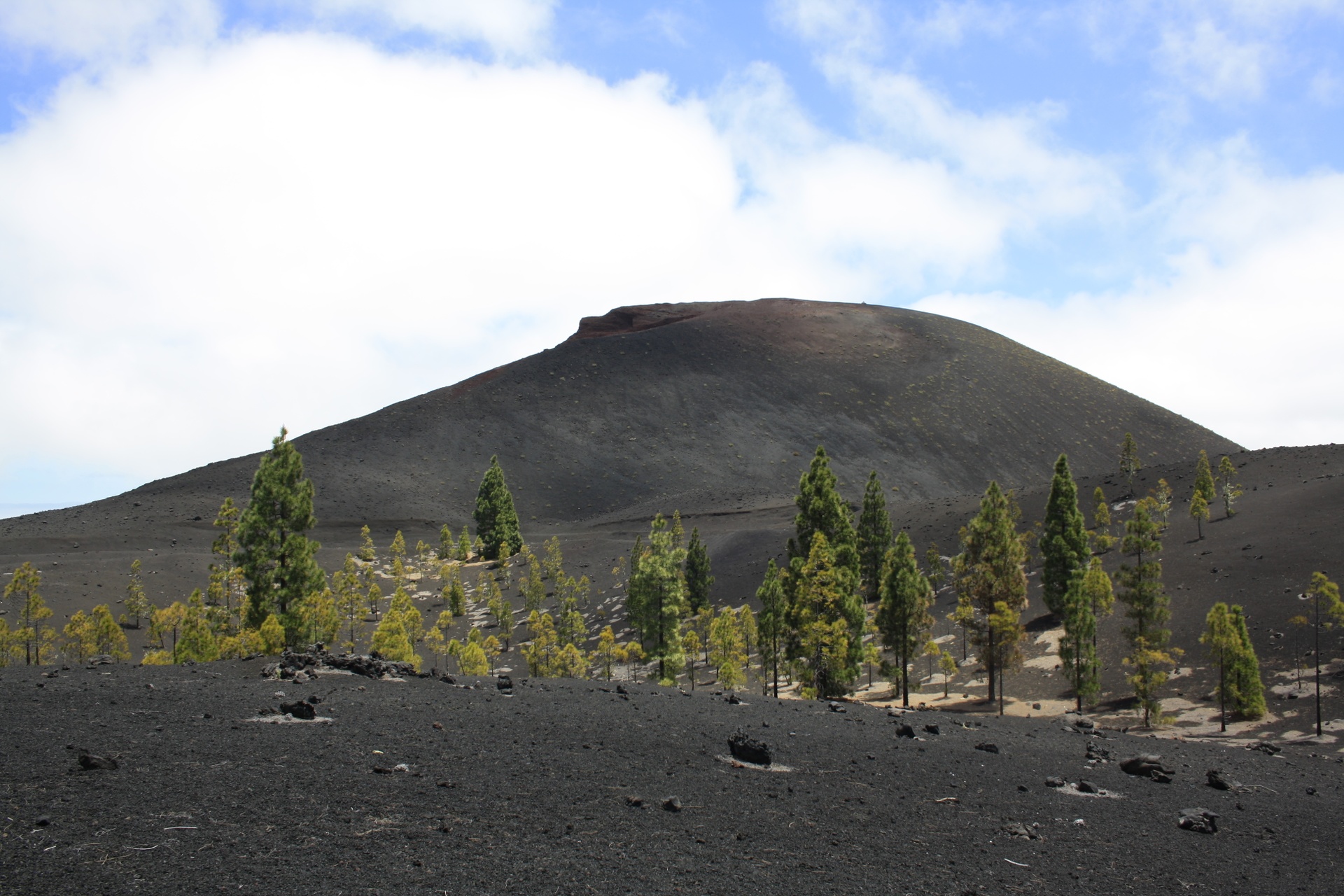 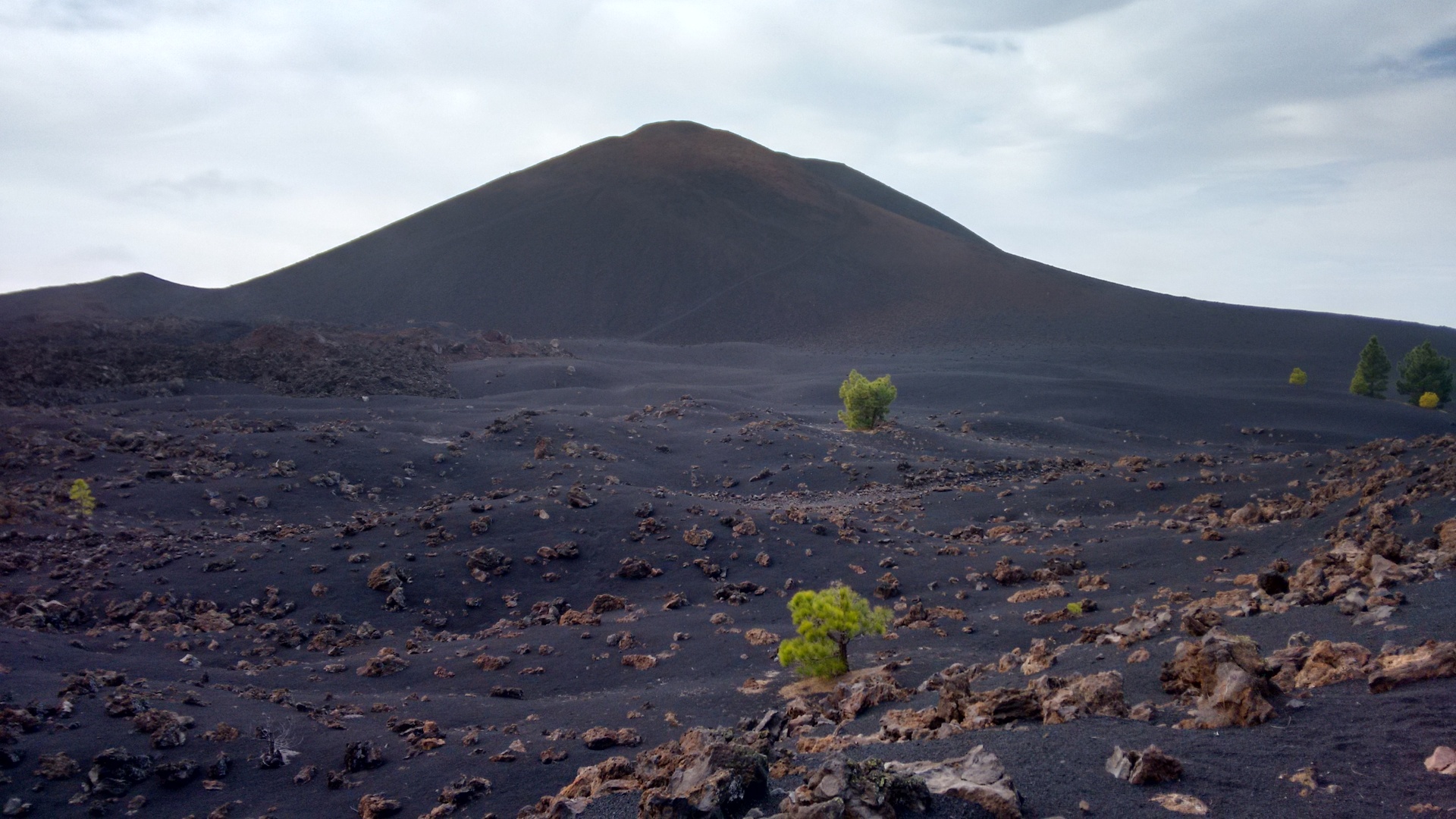 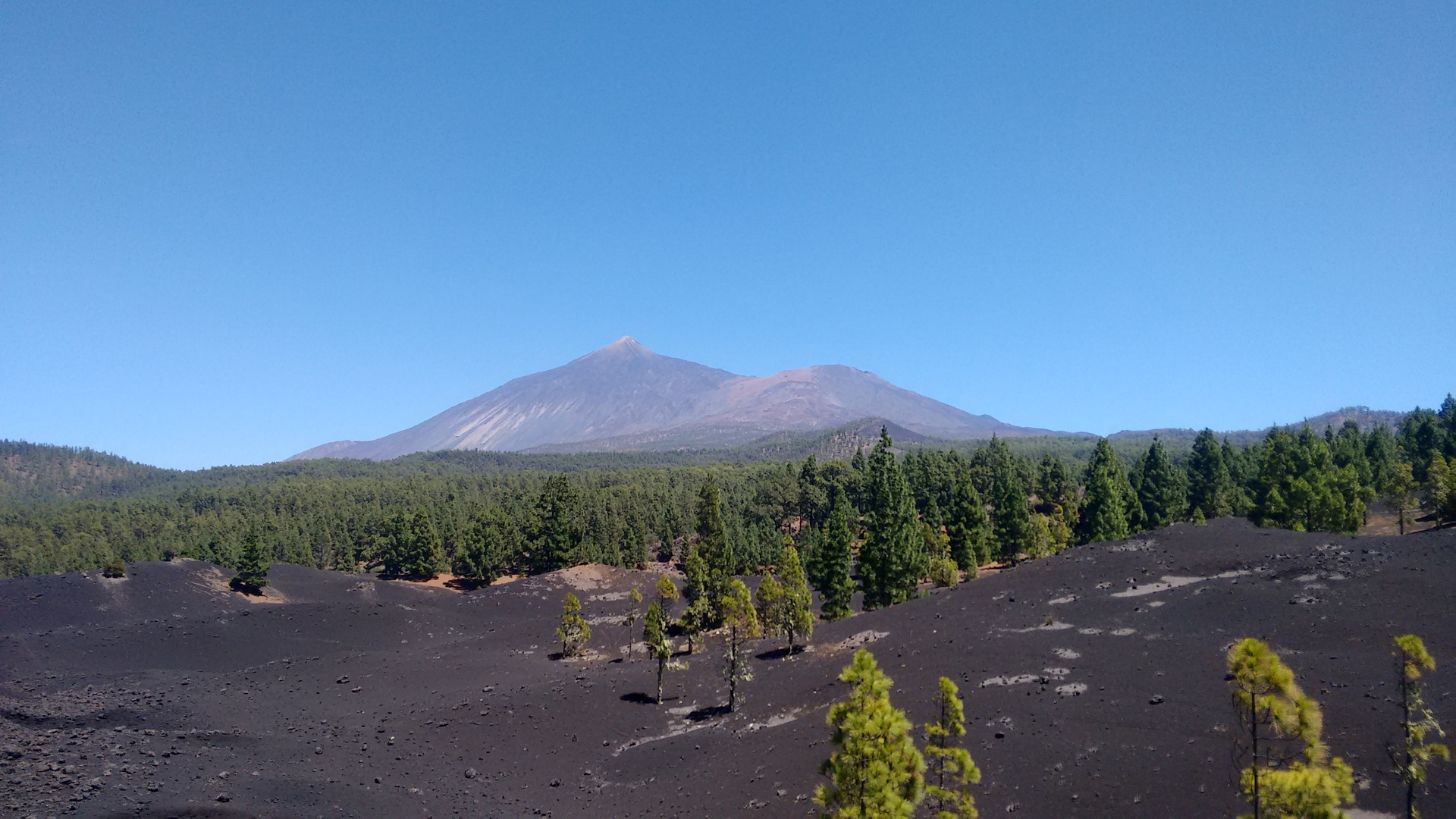 Guided hiking excursion to the Arenas Negras and Chinyero volcanoes in the Chinyero Special Nature Reserve. This territory has been protected for its high geological value, where we find two of the youngest volcanoes on the island of Tenerife, called historical because there are dates and written and even visual documents of these eruptions. We will witness how this recent and fragile landscape has evolved over the last few centuries.

We will enter the Canary Island pine forest, the only natural species of pine in the Canary Islands. We will learn to recognise it and discover its great peculiarity, its resistance to fire, which allows it to resprout after suffering a fire. We will also reveal the multiple uses it has had on our island over time and its great capacity to capture fog and water.

Precisely, crossing the Canal de Vergara, which transports water extracted from water galleries, reminds us of the valuable presence of the Canarian pine forest on the island to obtain this liquid treasure once it has been filtered underground.

In the middle of the pine forest, the vegetation stops and gives way to a more arid and mineral territory, where a small volcano of dark and ochre colours rises in the middle of a field of lava, Arenas Negras (1706). In the distance, when the clouds permit, Teide and Pico Viejo, Tenerife's two largest volcanoes, also rise up, crowning the centre of the island. The blue sky, the white of the clouds and the green of the pine forest provide the rest of the nuances for a sublime contrast of colours.

The tranquillity of the place clashes with the dramatic history of this volcano, which changed the history of Tenerife, of the Villa and Port of Garachico and of its inhabitants. We will tell you this story and also the other story of the nearby volcano Chinyero (1909), the last volcanic eruption on the island of Tenerife so far. We will cross its lava field, observing a fragile ecological treasure, which biologists, geologists and other scientists study to find out how its rocks evolve and the species that grow on them, like a baby, from its earliest days.

Beautiful landscapes, volcanoes with history and a forest full of life and treasures, where, with luck, some of the native species of animals that live in the area, such as the blue chaffinch, will also be present.

Enjoy this pleasant trail with our guides and their stories..

*Minimum 4 people in the group to confirm the excursion.

Transport: 10€ per person
If you want us to pick you up from your accommodation and take you back. You won't have to drive, you can rest in our vehicle on the way there and back. In addition, we are official guides and you will be able to enjoy our interpretations and commentaries of the places we pass through. You can add this service to your booking.

Picnic: 7,50€ per person
If you want us to bring you a picnic for the excursion. You don't have to worry about shopping and preparing the picnic, we take care of it. We usually buy fresh, local, seasonal and appropriate products for the excursion that we taste together during the route. You can add this service when you make your booking.

If you have any functional diversity that requires special attention from us. We ask you to tell us your case in order to analyse if it is compatible with the characteristics of the excursion and offer you the necessary service for your enjoyment. You can contact us in advance to analyse your case or add this service when you make your booking by filling in the comments box.

If this tour interests you, but you would like to adapt or customise it in any way. You can contact us in advance to discuss your case or add this service to your booking by filling in the comments box.

If the conditions are not suitable for the excursion (the most common reason is bad weather) or there are not enough people booked, we will contact you to inform you of alternatives. Normally we can offer you:

Cancellation (by the client)

If you wish to cancel the excursion for any reason:

Our guide will take care of your well-being and will act at all times so that you enjoy the experience with health and safety.

For your safety, we apply the 3 following principles

You must comply with the following conditions to participate in this excursion:

IIT IS NOT ALLOWED  to do this excursion to the following persons:

IT IS NOT ECOMMENDED  to do this excursion to the following persons:

If you have symptoms compatible with COVID-19, such as a cough or fever, please notify us and seek medical care as soon as possible. The responsibility of each one goes to the benefit of all.

Our company follows the protocols set by the health authorities for the prevention of the spread of COVID-19. In general terms, during the excursion we will ask for your collaboration to respect the following code:

Get Ready for the Excursion

When making your reservation, we will tell you the meeting point and the meeting time, either at your accommodation, if you have chosen the option of transportation with us, or at the starting point of the excursion. We will also indicate who will be your guide and our contact for any questions.

What do you need to bring?

Do you have any questions about this excursion?

Yes. Contact us via the Contact form and we will get back to you in more detail.

Do not hesitate to contact us in case of any further query.

If you participated in this activity, we appreciate your review to keep improving our services and guiding, and keep also what you enjoyed.